Fungi are everywhere: in the forest, in your house, in your food – yes, even in your body. But what are fungi actually? Are they animals, plants or something else? Read on and get a crash course on a wonder of biology that is totally unique.

FACTS ABOUT FUNGI
EVOLUTION OF FUNGI

Fungi come in many different forms and shapes and have been divided into three categories:

A closer look at fungi

Most members of the fungus family create a mental image that might remind you of a mushroom-like, living organism found in forests. Fungi, however, are a very diverse group of organisms. This is clear just from the many different types of mushrooms you can find in forests. But mushrooms make up only a small part of the total fungal mass, and by no means do all of those fungi produce mushrooms. Fungi hide their true selves underground, namely as large and extensive networks of threads:

In this article, we dig under the soil and discover what fungi actually are.

Fungi at the cellular level

Fungi are living organisms that are made up of cells. Fungi are what we call eukaryotic organisms, which is one of the three domains of biology:

Eukaryotic cells are characteristically larger cells with a cell nucleus which contains all the genetic material. Eukaryotic cells also have what are referred to as organelles. These are cellular subunits each of which carries out its own specialized process. Organelles are to the cell what organs are to our bodies.

The eukaryotes are made up of three kingdoms: animals (Animalia), plants (Plantae) and fungi (Fungi). The rest of the eukaryotic organisms, which do not fit into these three kingdoms, are called protists.

It was previously thought that fungi belonged to the realm of plants, and for good reason. The mushroom and its underground network of filaments are very reminiscent of a plant with roots. And in contrast to animals, fungi are unable to move around on legs. But in fact, fungi are more closely related to animals. Animals and fungi have one special thing in common which plants do not have: They are heterotrophic organisms. This means they are dependent on taking in nutrients to create energy. They use the energy to drive different processes, which enable them to survive. Plants, on the other hand, are autotrophic and are not dependent on consuming food. Instead they use photosynthesis to obtain the energy they require from the sun’s rays.

Fungi have two different modes of living. The majority of fungi live as filamentous fungi and are multicellular organisms. Fungi can also live as free unicellular organisms, better known as yeasts. But these are only modes of living. Some fungi live as yeasts under one set of circumstances and as filamentous fungi under others.

Filamentous fungi have developed a unique morphology (structural features and appearance) which gives them an optimal ability to break down materials and take up nutrients from their surrounding environment. They live in the form of elongated threads, which are called hyphae.

The hyphae contain fungal cells in rows and lines. To keep the external world out they build a cell wall for protection. Between each cell there are internal walls called septa. These are often open (porous), which allows material to flow between cells. Septa can be barricaded if a break occurs in the cell wall in one of the cellular compartments. The hypha grows from its tip which, if one wants to show off one’s vocabulary a little, is called a spitzenkörper.

The large and extensive network of branched hyphae is known as a mycelium. The smart thing about the mycelium is that the fungus creates a maximum surface area, which optimizes its uptake of nutrients from the outside world.

In contrast to animals and plants, fungi have no upper limit to their size and age. As long as there are available nutrients, each individual hypha can, in theory, grow forever. As a result, there are some immensely large individual fungi. In Oregon, there is an example of dark honey fungus, Armillaria ostoyae, which has grown to around 8.8 km2 in size and holds the title of largest organism on the planet.

Under the forest floor, you can typically find large mycelium that live by digesting the nutrients no other organisms can use.

In contrast to animals, fungal digestion does not take place internally but in the external environment. Fungi secrete highly efficient enzymes, which convert large, complex molecules into smaller compounds. Those smaller compounds are then taken in through the fungi’s protective barrier. Fungi have a powerful arsenal of enzymes capable of breaking down various materials. For example, some of the enzymes can break down lignin in tree trunks, which would otherwise be very difficult to digest and would protect the tree from fungal attack.

It is because of these enzymes that fungi are indispensable in the world’s ecosystems. That is to say, fungi are nature’s primary biodegraders and are responsible for breaking down dead organic material. This includes everything from fallen leaves and tree trunks to dead animals and insects. Organisms that live on these nutrient sources are called saprophytes. The dead organic material is made up of large complex compounds which powerful fungal enzymes break down into simple organic compounds that can be used as nutrients. This process is crucial for nature’s ecosystems, preventing the buildup of large amounts of organic material in nature. Fungi ensure the continuation of nature’s life cycles.

Without fungi, the plant kingdom would hardly be able to exist as it does now and the world’s forests would look completely different. This is not just because of the important function of biodegrading fungi in ecosystems, but also because of another group of fungi.

A plant provides itself with energy and sugar by taking carbon from the carbon dioxide in the air. But it also needs water and minerals, especially nitrogen and phosphorus. Water and minerals are taken up from soil through the plant’s roots, just as a mycelium is designed to create the greatest possible surface area.

The problem with plant roots is that they are nowhere near as thin and fine as hyphae. Fungi are much better equipped for this job. Moreover, their enzymes allow them to take up minerals, which plants cannot.

Almost all the world’s plants have therefore established a collaborative relationship with fungi — through what are termed mycorrhizae. According to the rules of this relationship, fungi supply the plant with minerals and water from the soil. In exchange, the fungi obtain sugars, which the plant has synthesized by photosynthesis.

The relationship begins with the fungi colonizing the plant’s roots, either by covering the roots or by penetrating them. The fungi’s hyphae then grow out from the roots and create a fantastic surface area around the roots.

Mycorrhizal fungi are rarely found in other scenarios in nature, as they are highly dependent on obtaining sugars from plants. Mycorrhizae are a prerequisite for the survival of these fungi. That is to say, the fungi are obligate symbionts.)

Mycorrhizae are not the only example of a mutualistic relationship in fungi. Circa 6% of the Earth’s surface is covered by another form of symbiotic life; lichen. Lichen is a combined organism of fungi and algae or cyanobacteria and can found on surfaces such as rock. Algae or cyanobacteria can carry out photosynthesis and can therefore make organic compounds for both parties. The fungus can secrete acids that break down minerals from rock, and its hyphae are employed somewhat like an anchor to attach the organism firmly to the rock.

Fungi reproduce and spread with the help of spores. Spores are tiny particles, which distribute the fungi to new sites with good growing conditions. As soon as a spore lands in a favorable spot, a new fungal colony is established. Spores are therefore an important part of the life cycle of almost all fungi, as they facilitate reproduction. 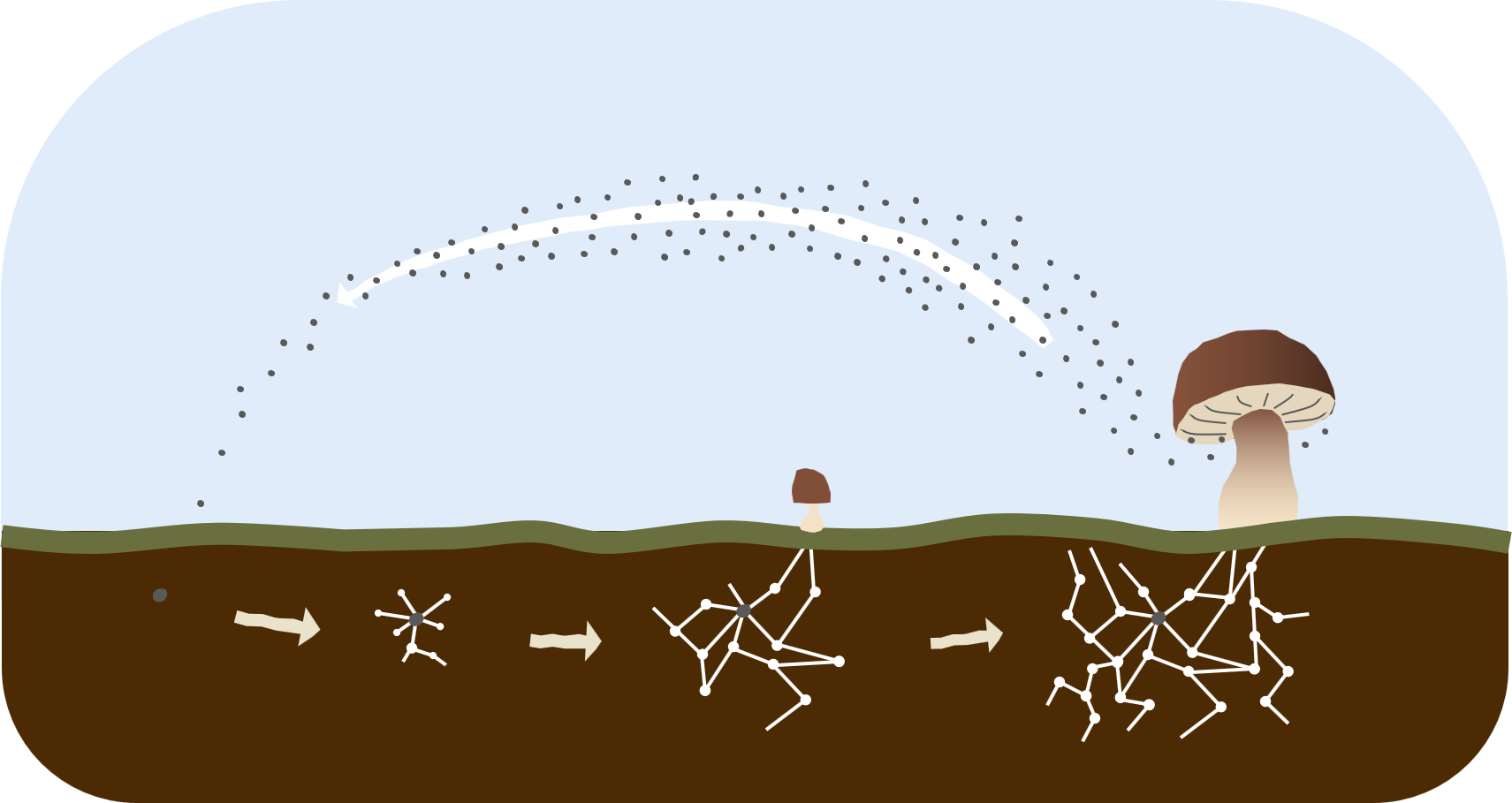 To ensure that the spores spread, fungi have developed effective spore-producing structures. Mushrooms (fruiting bodies) are a good example of this. Underneath the mushroom, millions of spores are disseminated out into the atmosphere from the gills or tubules. Spores can therefore be found everywhere, in both the atmosphere and the oceans. Every year the Earth’s fungi produce ca. 50 million tons of spores.

The architecture of the spore-producing structures varies from fungus to fungus. Molds have their own microscopic structures. To the naked eye, some of these structures resemble small cilia, while others look like dust that has settled on the mold.

Fungi can reproduce both sexually, through meiosis, or asexually, through mitosis. It is generally advantageous for fungi (as for all organisms) to use sexual reproduction, as this can give rise to new offspring, thereby facilitating evolution. On the other hand, asexual reproduction involves less effort and can offer fungi an easier solution, as it does not require contact with a partner. Asexual spores are called conidia and are found in particularly large amounts on molds.

When a spore lands in a place with optimum growing conditions, a new fungal colony can begin. Hyphae grow out from the spore and reach out in search of nutrients. In nature one may encounter fairy rings, which clearly show where a spore has landed:

This life cycle applies to almost all fungi, but there is one exception.

We are rounding off this discussion of fungi with yeasts. Yeasts represent an alternative mode of living for fungi. It simply means living as a unicellular organism. So in this respect, yeasts are, in many ways, similar to bacteria.

Today, yeasts are used in many situations. The best-known yeast fungus is Saccharomyces cerevisiae, which is used in baking, brewing beer and wine, and so on.

Compared with multicellular fungi, yeasts divide rapidly, and this division occurs by budding.

You have now gained an insight into the exciting, intriguing world of fungi. Fungi come in many different forms and shapes and have been divided into three categories: 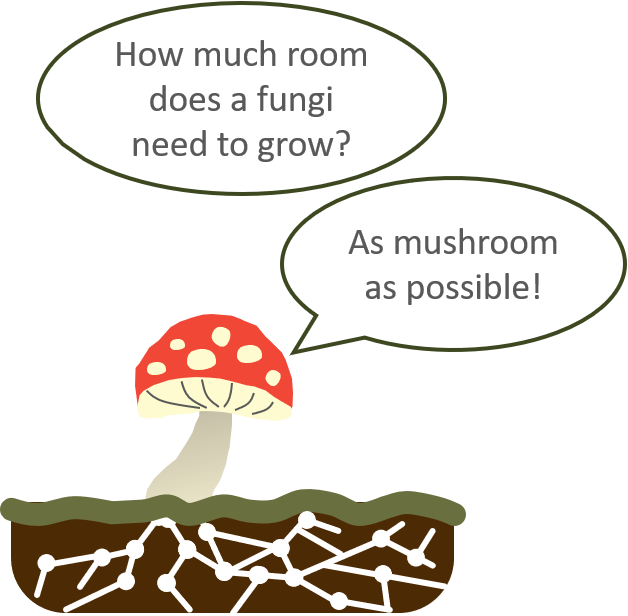