Fungi can be dazzling, cool, creepy, or even deadly. Fungi make up a mysterious group of organisms with amazing skills. Below you can find a list of some of the world’s most fascinating fungi – from a glowing foxfire to a honey fungus that is the world’s biggest organism, covering 8.8 square kilometers.

Dark honey fungus, or Armillaria ostoyae, is a parasite that lives off primary coniferous and deciduous trees. When growing conditions are good, it can grow to a large size — huge, in fact. An example of this fungus holds the record for the world’s largest ever organism, with a size of over 8.8 km2. The reason it is able to grow so large is that it is extremely good at obtaining nutrients from the trees it lives on. The fungi’s large component is its mycelium, which is a network of long filaments called hyphae. The hyphae in dark honey fungus is particularly specialized in penetrating deeply into trees. The largest ever organism is found in Oregon and is thought to be between 2,000 and 8,500 years old. 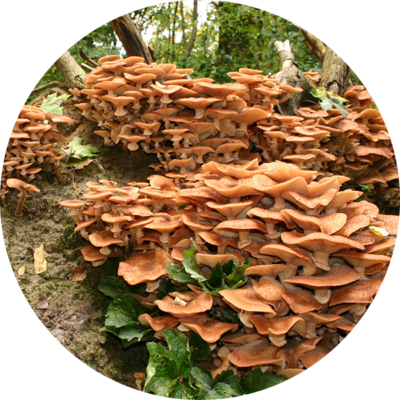 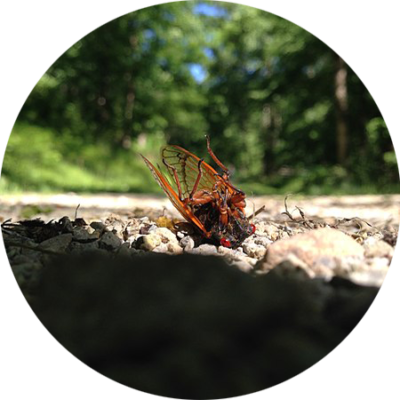 The fungus Massospora cicadina is also found in the USA. It is a parasite that has specialized in living on cicadas. When infected, cicadas become brainwashed, and the fungus takes over. The male cicada flaps its wings in exactly the way the female cicada does when it is ready to mate. This attracts other male cicadas, which allows the fungus to spread further. The male cicadas become new hosts for the fungus, which spreads further onto the females when they try to mate. The fungus gradually grows larger in the cicada’s abdominal region and, at some point in time, the fungi’s late infection stage is triggered. This causes the cicada’s lower body to explode, exposing a large mass of fungal spores. We should be pleased that the fungus has not specialized in humans.

The liberty cap, also called the “magic” mushroom, was particularly ingested by hippies in the 1960s, because of its content of the psychedelic substance call psilocybin. Various archaeological finds from the past also indicate that this mushroom has been ingested throughout history.

When ingested, psilocybin is converted to the active metabolite psilocin. Structurally the psilocin molecule is remarkably similar to that of serotonin, one of the central nervous system’s neurotransmitters, which is often associated with a feeling of happiness. Psilocin boosts the same neural signals as serotonin by binding to the same receptors. The brain is disrupted with some extreme psychological results, including hallucinations and possibly spiritual experiences, but also anxiety and panic attacks. Modern research has shown interest in the use of psilocybin as a medicine for alleviating mental illness in patients. 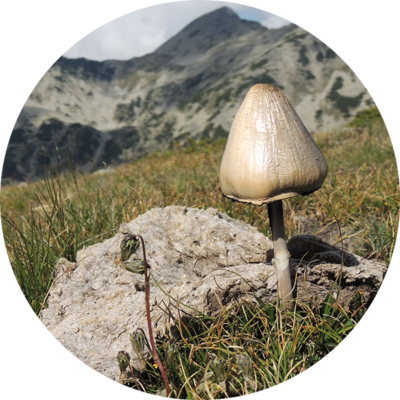 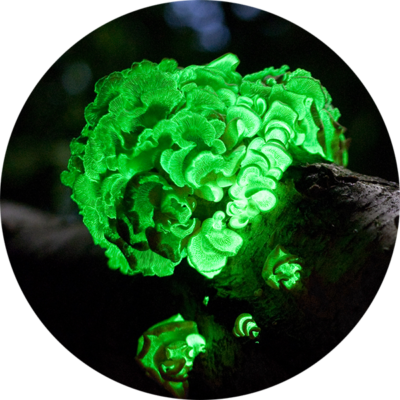 When walking through a forest at nighttime, you might be fortunate enough to experience a special phenomenon that would result in a bluish-green color surrounding a tree trunk. The phenomenon is called foxfire, and when Aristotle experienced this in 382 BC, he believed the tree trunk was enveloped in a cold fire.

The light of foxfire comes from so-called bioluminescent fungi. This property is found in more than 70 species of fungi. The light is emitted from a reaction catalyzed by the enzyme luciferase — the name comes from the Latin word “lucifer,” which means “bringer of light.” Nowadays, luciferases are used for a variety of different purposes in the world of biotechnology. The light that is emitted can be used as an indicator in, for example, DNA sequencing.

Arthobotrys oligospora is an example of a flesh-eating fungus that lives as a predator. Its prey is the nematode, a tiny elongated worm found everywhere in the soil. The fungus captures the worms by making small loops in its mycelium, which act as worm traps. The traps become covered in a sticky substance that holds on to the nematodes. As soon as a nematode tries to move through the loop, it is captured and is ready to be eaten by the fungus. Fungi with this ability have considerable potential for controlling nematode pests, which cause major losses in crop yield. 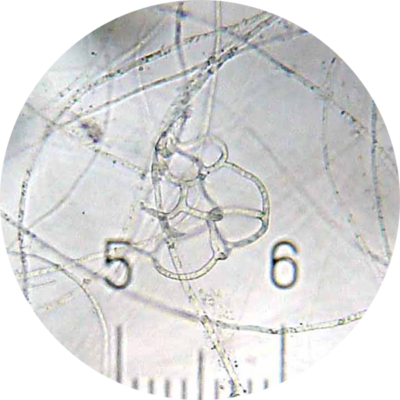 The genus of fungi called Ophiocordyceps is a real example of the zombies from The Walking Dead. The genus comprises around 140 species of parasitic fungi, which grow on insects. One of these is the fungus Ophiocordyceps unilateralis, which has specialized in preying on ants. When an ant becomes infected, the fungus takes over its volition and behavior and causes it to migrate away from its fellow ants to a place with the right growing conditions — up in a tree. The ant is then made to clamp itself to, for example, a leaf or branch with its mandibles and to remain there until it dies. Meanwhile, the fungus consumes the internal parts of the ant and slowly grows outside the ant in the form of a fruiting body, which is used to spread spores in search of new ants.

Activity: Imagine your own amazing fungi

What would they be able to do in nature? What problems could they solve? Where would we find them?
Draw and write about your fungi. If you are feeling creative, you might need a little more space to unfold your talents and storytelling.