A type of fungi, molds are nature’s garbage collectors, and they tend to show up everywhere. The air around you contain millions of microscopic spores, which are seeds from fungi – similar in function to dandelion seeds. But the spores can only grow and become mushrooms if the growth conditions are right. The best growth conditions are damp houses and old food. But mold is not only damaging. In fact, it can also be used to produce life-saving medicine.

EXPERIMENT WITH MOLDS
WHAT ARE MOLDS?
MOLDS, GOOD AND BAD 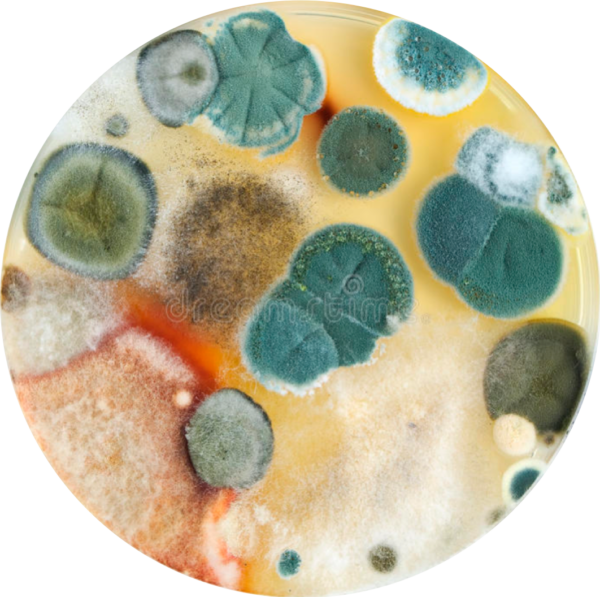 Colorful
Molds can be very beautiful and are found in an abundance of different colors: green, blue, yellow, red or pink. The colors are due to the many substances that the fungi produce, and which are used for everything from protecting them against the sun’s rays to keeping other fungi at bay.

Damp
Sometimes molds create small, fine drops of exudate on their surface. These drops can make them appear wet and contain a very high concentration of enzymes and secondary metabolites, which are substances that are important for the survival of the molds.

Dusty
In contrast to common mushroom-shaped fungi, as you know them, molds grow by forming a large mycelial network from which so-called conidia grow. Conidia are microscopic spore-bearing outgrowths. These millions of small branches with spores give molds a dusty appearance; conidia actually means “dust” in Greek.

Molds, the good and the bad

You may be most familiar with molds as the harmful fungus that can be found in the house. But in reality, molds can be much more than that. Read on and learn about why molds are so important — and can be so harmful.

Molds are found in many foodstuffs and are consumed throughout the world.

Under controlled conditions, molds can impart a marvelous taste to foods.

Penicillium roqueforti is used to make blue cheese and Penicillium camemberti for brie and camembert. Penicillium nalgiovense is used in salami and sausages to impart flavor — and the white pigment of the skin. Quorn is an interesting meat substitute produced by Fusarium venenatum.

Food
Molds are found in many foodstuffs and are consumed throughout the world.
Read more

Molds are to blame for food going off.

Food is a source of energy for humans, but also for molds, and therefore food can quickly go bad. Molds that grow on food produce enzymes which break down foods and can spoil the taste. Molds should be avoided under uncontrolled conditions as they can be harmful to health and can ultimately prove fatal. Penicillium roqueforti can also grow on bread, where is secretes hazardous amounts of mycotoxins.

Spoilage
Molds are to blame for food going off.
Read more

Molds produce a plethora of substances that can be used in the pharmaceutical industry.

In 1928, Alexander Fleming discovered the revolutionary antibiotic penicillin. He cultivated the mold Penicillium rubens on a petri dish and observed that bacteria did not grow around the mold. This was because the mold had secreted penicillin.

In addition to antibiotics, an abundance of medicinal products have been obtained from molds, such as anticancer drugs, antimalarials and cholesterol-lowering drugs. Researchers are constantly working to find new molds and isolate their substances.

Medicines
Molds produce a plethora of substances that can be used in the pharmaceutical industry.
Read more

Fungi cause illness in three different ways.
Allergic reaction: Fungal spores can induce an allergic reaction in some individuals. An allergic reaction occurs when the body’s immune system shows a hypersensitivity response to a foreign substance which is normally harmless.
Toxic substances (mycotoxins): some fungi produce so-called mycotoxins, which are substances that are toxic to humans and other vertebrates. The best-known mycotoxins are the aflatoxins from Aspergillus molds. Aflatoxin B1 is the most potent mycotoxin as well as being carcinogenic.
Fungal infection (mycosis): fungi which cause disease by directly infecting the host. Serious systemic mycoses only occur relatively infrequently, but they may occur in patients with weakened immune systems. Less serious mycoses, such as athlete’s foot, occur more frequently.

Fungi is nature’s garbage collector and can therefore be used for decontamination.

Researchers are working constantly to apply fungal technology to cleaning up the global community. Fungi offer a green and cheap solution for, for example, treating wastewater and garbage. Some fungi can remove toxic substances, such as pesticides from agriculture, and remove heavy metals such as lead and mercury. It has been discovered that Penicillium digitatum, which grows on citrus fruits, can be used to take up uranium.

Clean up
Fungi is nature’s garbage collector and can therefore be used for decontamination.Read more

Fungi can grow almost everywhere, including where it is not wanted — e.g., on usable materials and resources.

Molds can grow in homes under damp conditions. These fungi can be unhealthy and release mycotoxins, particularly the Stachybotrys genus.

Fungi can grow (almost) everywhere, even in aircraft. Growths of Hormoconis resinae molds can be found here, living in diesel and jet fuel tanks where it feeds on the fuel.

Dry rot fungus Serpula lacrymans has powerful enzymes which can break down the wood in buildings.

Damage
Fungi can grow almost everywhere, including where it is not wanted — e.g., on usable materials and resources.
Read more

Try leaving out a piece of bread, a lemon, a garlic and a tomato and see whether any mold grows on them. This will allow you to study the shapes, colors and textures of different molds.

If you want to go further, test organic versus non-organic food samples or place them in damp versus dry conditions.

Important: Remember to cover the foods if you see mold to avoid the fungi spreading. 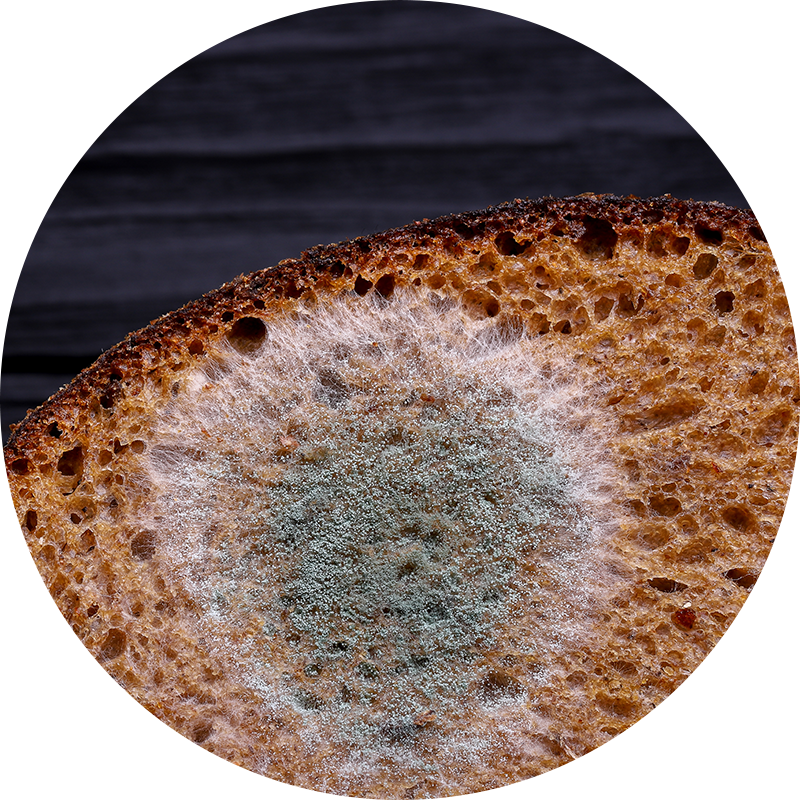 You will no doubt have experienced the same thing when your bread has lain in a cupboard for a couple of days and has become moldy. It has been attacked by molds, which break down the starch in the bread. It is not enough just to cut away the moldy area as the mold sends out hyphae through the bread and these go further than one can actually see.

It is relatively easy to identify what mushrooms are growing on citrus fruit. It is the green Penicillium digitatum and the blue Penicillium italicum in particular which attack citrus fruit. Both fungi cause a lot of harm to citrus harvests every year! 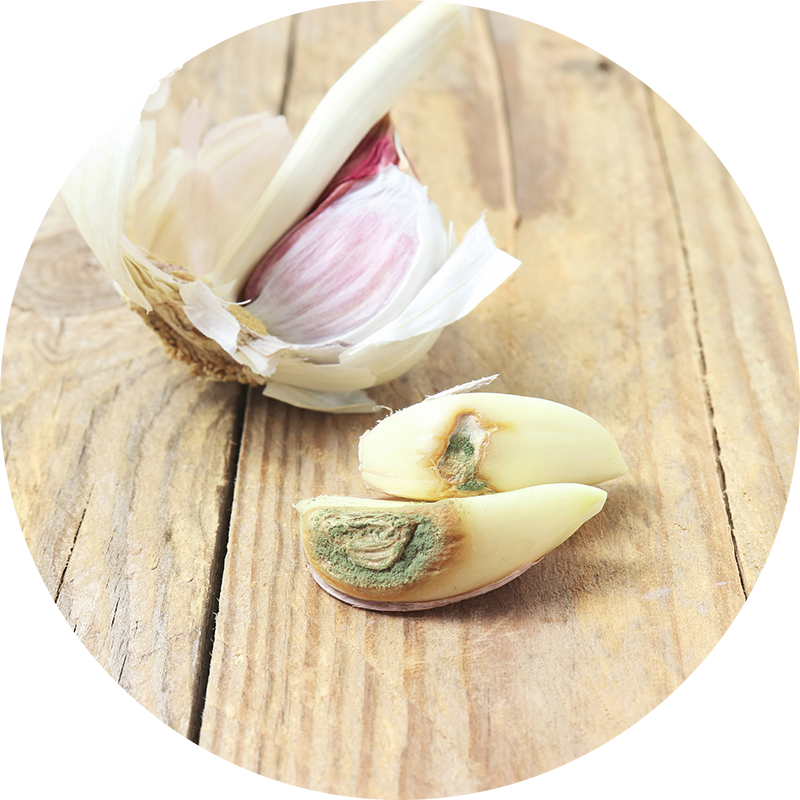 Garlic actually has antifungal properties, which means that it inhibits mushroom growth. Therefore, like chili and ginger, it is used a great deal in countries where food hygiene standards are relatively low. But certain molds, for example, the green Penicillium hirsutum, have specialized in growing on garlic. 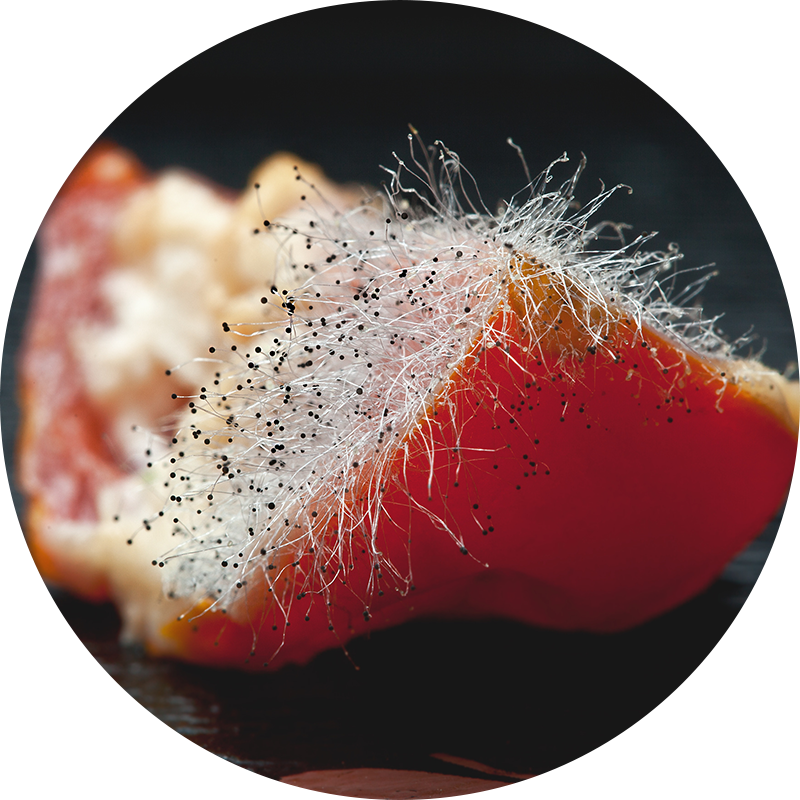 If you are lucky, zygomycetes will start to grow on your discarded tomatoes. Zygomycetes make up one of the five fungal phyli. They are easy to spot as their spores grow into a sort of thin cilia with a small bobble on the top.

See what happens when you use the following types of foods:

Try and see what happens if you leave out both organic foods and foods which have been sprayed, at the same time. On which do you think fungal growth would occur first, and why?

Try to experiment with dampening your foods before you lay them out, to see how this affects how long it is before mold appears. As already mentioned, molds love to grow in damp places. So perhaps you understand now why damp cellars so often contain molds.

Don’t forget to take pictures to document the mold growth on your foods. Make a mold collage.